The Department of Medical Surgical Nursing enables the students to review and apply their knowledge of Anatomy, Physiology, Biochemistry and Behavioral sciences in caring for adult patients with Medical/Surgical disorders using nursing process approach and critical thinking. It also intends to develop competencies required for assessment, diagnosis, treatment, nursing management, and supportive/palliative care to patients with various Medical Surgical disorders. The Department aims to offer comprehensive training to undergraduate and postgraduate students based on the philosophy that students need to be well informed not only in knowledge and skills in basic and advanced nursing procedures but also in the upcoming scientific advances in different areas of clinical practices to enable them to face new challenges and opportunities in various health care settings. 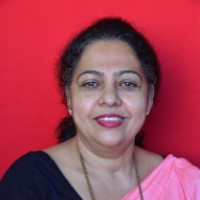 Dr. (Prof). Mrs. Fatima Dsilva is an outstanding academician and an excellent administrator with over 25 years of experience in the nursing profession. Has been associated with NITTE University since 2004 and was promoted as a Principal since 2011.

She completed her graduation in 1992 and post-graduation in Medical Surgical Nursing with Cardiovascular and Thoracic nursing specialization from Father Muller College of Nursing, Mangalore in the year 1996.She was awarded her doctoral degree under the National Consortium for PhD Nursing in India, constituted by Indian Nursing Council in collaboration with Rajiv Gandhi University of Health Sciences and W.H.O. in the year 2015. She has worked in various capacities as a tutor, clinical demonstrator, Lecturer, Asst. Professor and Professor and has also worked in administrative capacities as a Vice Principal and Principal. She also has worked as a Senior Clinical Tutor at Muscat Nursing Institute Sultanate of OMAN from 21/03/2001 - 21/04/2004.

Professional Memberships
Chairperson of Institutional ethics committee, Nitte Usha Institute of nursing sciences, Since March 2012
Was Chairperson of Institutional ethics committee, K.S Hegde Medical Academy-2011-2013
Was Member of the Central Ethics committee, Nitte University in 2011
Was Member secretary of the Continuing education cell of Nitte University, in 2009
Chairperson of BOS, Nitte Usha Institute of nursing sciences, Since April 2009
Academic Council Member, Nitte University, Since 01/04/ 2013
Life member of Trained Nurses Association of India in 1992
Life member of Christian Medical Association of India in 2006
Member of the Advisory Committee of NSS cell, Nitte University, Since 2012
Life member of Asian association of Cardiovascular nurses in 2011
Dean of Faculty of Nursing Sciences, Nitte University in 2013 till 31st March 2015
Member of Quality assurance cell, Fr. Muller's college of Nursing, for the duration 2012-2015
Editorial member of International Journal of Nursing Education in 2013
Editorial member of Indian journal of health science in 2014
External Reviewer of the LWW publications in 2013
Member of BOS (Yenepoya University), from 01/01/2014 till 01/01 2017
Member of BOS (Dayananda Sagar University) in  2015.
Member of the Vision document committee of Yenepoya University in 2016
Subjects Handled
In the past tenure of service   subjects like Nursing Research, Nursing Education, Nursing Administration, Nursing Foundation, Advanced Nursing Concepts and Medical Surgical Nursing for UG and PG students was handled.
Currently handling Medical Surgical Nursing  for postgraduate students
Project Guide
Has guided and completed successfully 31 undergraduate and postgraduate research projects and published 31 papers in indexed journals Is a well-recognised guide for 6 ongoing part-time and one full time doctoral student
Conference/Journal publications
Sponsored Research

Published a monograph on 'Therapeutic nutrition' in 2012

Published an e-book on 'Life Style Modification Practices of Persons with Hypertension' by Lambert's Academic publishers, Germany in 2012

Invited as a Judge for paper presentation in the 19th Annual National Conference of Nursing Research Society of India on 29th Oct 2015 at Fr. Muller's College of Nursing, Mangaluru.

Was selected as a judge for the paper presentation during an International conference on Evidence Informed practice: An Approach to healthcare reform held on 24 and 25th Jan 2015 and the 19th Annual National conference of NRSI   held from 29th to 31st Oct 2015

Chairperson during the 12th National conference of SOMI, India held on 21st and 22nd Nov 2015

External evaluator for research proposals for grants from funding agency at Yenepoya on March 17th 2018.

Was appointed as a KNC observer for the National conference on 'Simulation in Nursing 'held on 24th and 25th May 2019 at Fr Muller's college of Nursing, Mangalore 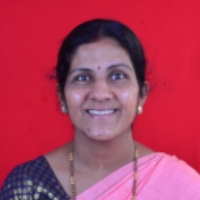 Completed 19 years of UG and 13 years of PG teaching experience .

Certified in the following

2. Short term course on research methodology from Nitte (deemed to be )University

Completed BSc Nursing from  Govt. College Of Nursing ,Calicut Medical College in the year 1999 and M.Sc Nursing in Medical Surgical Nursing  from Nitte Usha Institute of Nursing Sciences in 2007.Worked as a Clinical Instructor at Unity College of Nursing Mangalore from march 1999  till 17.2.2001.Fortunate to join Nitte Family as Nursing Tutor in School Of Nursing w.e.f. 19.2.2001.During the tenure of service served as Vice Principal SON for 1 year till May 2007.Has completed 19 years of  UG  and 13 years of  PG teaching experience . 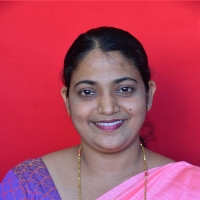 Genetic susceptibility and associated factors of tuberculosis among Indians and Tibetans

Trained as NSS officer from Mysore University in 2016

Visited Japan under JST project to Miyajaki University in 2017

Completed Graduation and post-graduation in Medical Surgical Nursing From Nitte  Usha Institute of Nursing Sciences. Has completed a short term course in Counseling from Roshni Nilaya School of social work. Has 11 years of teaching experience 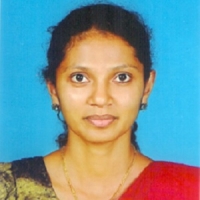 Best  Research Paper award for  Lived experience of women diagnosed with Breast cancer from national level workshop on "Taking the Crab out of the way - and oncological nursing perspective"  conducted by MIMS Calicut.

2. Relationship between iron intake and haemoglobin level among the migrated labour women working in the various construction areas of Mangalore

3. Effect of Aloe Vera juice on glucose level among diabetics in a selected old age home at Mangalore

4. Impact of lung Cancer awareness program on Knowledge and attitude among adolescents from a selected colleges of Mangalore

5. Efficacy of Interventional Thirst Bundle on Thirst and Dry Mouth among Patients with Naso-gastric Feeding.

1. Effectiveness of - dietary program on knowledge and dietary practice among patient with Cancer

2. Latha S, Gincy Joseph. A comparative study on impact of dry versus moist heat application on feasibility of peripheral intravenous cannulation among the patients of a selected hospital at Mangalore. Nitte University Journal of Health Science. 2017 Sep 1;7(3).

1. Relationship between iron intake and haemoglobin level among the migrated labour women working in the various construction areas of Mangalore in International Conference on Impact of Global Issues on Women and Children by Manipal College of Nursing  on 9th to 12th January 2017

Placement Officer of the NUINS

Completed post-graduation from NITTE Deemed to be University, Mangalore. 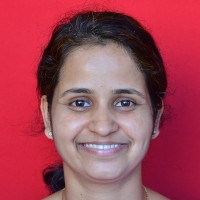 Bagged various prizes for elocution competition, essay writing, and other literary and cultural events during UG and PG period.

Basic schooling and PUC from Don Bosco High School, Sulcorna, and  Carmel Higher Secondary School, Nuvem, Goa. Completed GNM from Our Lady of Lourdes School of Nursing, Dharwad in 2011. PBBSc (N) from St John's National Academy of Health Sciences in 2014, Banglore  and MSc (N) from Mnaipal Academy of Higher Education, Manipal in 2018. Has 2.5 years of clinical experience in NICU and special wards.Hobbies singing, dance,gardening, a voracious reader of novels, magazines and better yourself books. 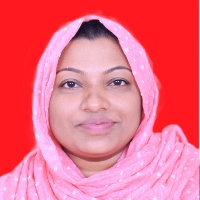 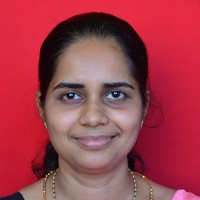 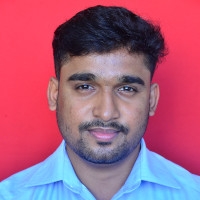 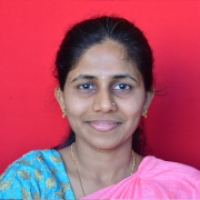 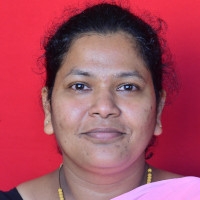 • Attended workshop on Assessment, resuscitation, and stabilization of children on 18th January 2019 at Nitte Usha Institute of Nursing Sciences , Mangalore.

• Attended a workshop on anybody can do research ( research methodology and SPSS workshop) on 5th - 8th 2019, by Department of Community Medicine, KSHEMA, Mangalore. 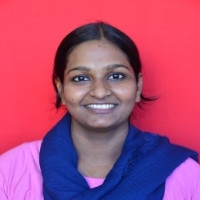 The department offers various skill-based training to enhance the hands-on competency of the students, like Value added course on Prehospital and Emergency life support, Critical care nursing, Renal Nursing, and ENLS. The ENLS qualified faculty from the department offers first aid and emergency nursing training to the rural community. Interdisciplinary training is an integral part of the department as the faculty from Nursing Foundation are involved in educating the first-year BPT and Respiratory therapy students. The students actively participate in all the health camps conducted by the parent hospital.

The college has a well-equipped Nursing Foundation and Medical-surgical nursing lab that are spacious and well furnished with advanced mannequins that act as a simulator for practicing basic nursing procedures. The students also get hands-on experience in the Central Skill lab of Nitte University: NU-MEDISIM on simulated clinical experiences.

The students are given the best clinical exposure at the 1200 bedded parent hospital Justice K.S Hegde Charitable Hospital in all specialty areas. Second-year P.G. students are sent to specialty hospitals like NIMHANS and B.M. Birla Institute of Cardiology and Research center Kolkata